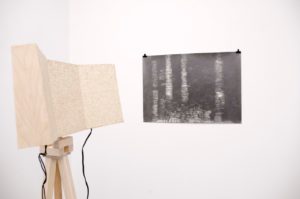 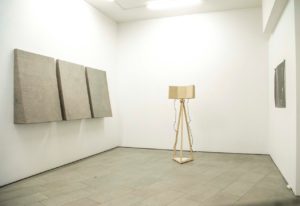 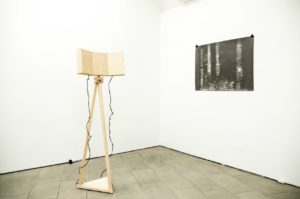 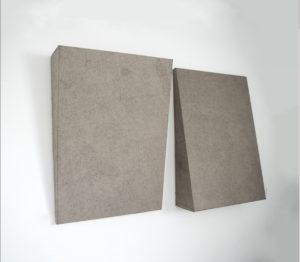 Sara Wallgren “A Song for three voices without words” 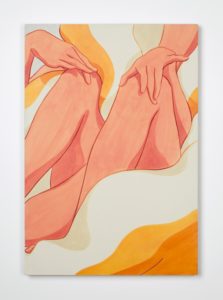 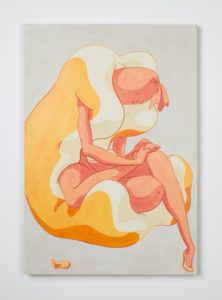 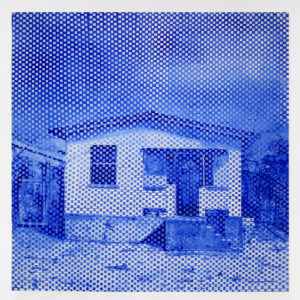 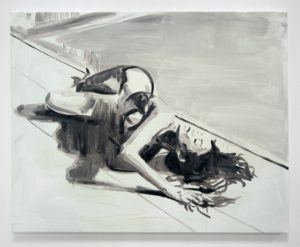 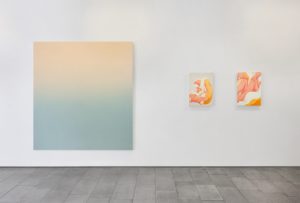 Ditte Ejlerskov (DK) and Ivy Haldeman (US) present the exhibition Yttrium, the second in a series of collaborative exhibitions that use the medium of paint to consider intersecting themes of feminism, fictions, idols, and the internet age. Each exhibition is named for a rare earth element, in this case, the star element is Yttrium.

Ejlerskov and Haldeman began their relationship in 2007 when they were both studying in New York City. Ejlerskov returned to Europe and Haldeman remained in the USA, at which point they ceased communication. Ten years later they reunited over the internet, only to find that their individual art practices had come to ask similar questions. They began a collaborative text to unpack these ten years that spanned their last interaction and to understand what occurred in their separate but connected worlds.

In their musings the artists realized that rare earth elements are the building blocks of future fantasies. Yttrium, in particular, is used in the construction of LEDs. In Haldeman’s home city, New York, the pallor of the streets has shifted from the noirish orange-yellow of sodium lights to the brighter blue hue of LEDs. The night seems closer to daylight than ever before. Across the ocean, Ejlerskov’s studio is illuminated by LED lights. Her exotic studio plants expand in their small pots, drinking up the brightness. Painting at night, these LEDs keep her mind and eyes open. The murky shadows of nighttime no longer exist.

There is no need to sleep, if one can help it. The rhythm of the sun has been disrupted by the rhythm of the internet. The rise and fall of the days are like waves in the ocean, lapping and constant, but not shaping the whole.

Ejlerskov and Haldeman have decided to communicate not through projected light and data, but pigment and binding mediums. Through paint, their protagonists are posing, bending, blending, expanding out of the limit of their own skin.
With their tools the artists materialize images found on the internet, and images projected by their minds. Sometimes, images on the internet and images in the mind seem to melt together and become indistinguishable.

In the end, the sun remains supreme. Paintings are sensitive to its light. UV rays can degrade colors, and crack and cloud mediums. Still, paintings do not prefer the night. They can only function when they reflect light. Have you ever noticed the ingredients in sunscreen? You’ll often find zinc and titanium dioxide, the same elements the artists have in their white paint. These paintings, here in the exhibition, can protect you from the sun. They will keep you looking young.